Dialogue Among Cultures; a Prerequisite for Asian Unity

Believing that dialogue among cultures is an important prerequisite for Asian unity, Iran took on the establishment of the Cultural Coordination Center of the Asia Cooperation Dialogue (ACD). Being strategically located on the world map and due to its geopolitical importance, superpowers would like to have it under their hegemony. I am sure that if all the geopolitical factors and elements in Asia come together then the center for making decisions and mantle of leadership of the world would shift from Europe and America to Asia. If that happens the whole international system will change, and this change will surely dampen the spirit of expansionism. Therefore, they will try their best to mobilize all their sources to prevent this from happening.

The “Dialogue Among cultures – A Prerequisite for Asian Unity” is, thus, very essential for initiating the idea of unity among Asian Countries.

In the present age, the concept of sovereignty, national security, national interests, and concerns has acquired a new dimension with wider ramifications and that is the reason why the definition of national security has been broadened to include ways and means to combat illegal production and trade of narcotics, the growth and menace of terrorism, the outbreak of diseases, environmental degradation, arms race, and expansion of nuclear weapons of mass destruction. The growing influence and domination of international organizations have also been included in this category. In fact, these are the regional and continental issues that call for cooperation among regional states. In other words, stability and security are matters of national concern and it is in the interest of all concerned to address these issues in Asia.

The Asian community has its own identity, value systems ad common destiny, facing new challenges as it goes. The recent political and economic developments and amazing breakthroughs made in science and technology have created a new world reality. Obviously, Asia cannot afford to stay isolated while these developments unfold themselves. The experiences of the past two centuries are reminders for all Asians that indecision, hesitation, and antagonism can once again resurrect the evil of colonialism to the past centuries in a new and even modernized form.

The Asian continent is located at a significant point which gives it a unique position. It has 60 percent of the global population and can provide the best manpower to the world. It occupies 33 percent of the earth’s space and is in the top position among all the continents of the world.

They have enough subterranean sources -75 percent of the oil resources of the world are in Asia, natural gas and coal are in abundance. It is not only self-sufficient but can also provide for the needs of other counties. Japan and ASEAN marine countries have a prominent position in the field of international; economy and commerce. India is fast developing and trying its best to occupy a prominent position in the globe. In the international trades, light and heavy industries, consumer products, and extractable outputs, the Asian countries are entrenched in a competing position. This provides an opportunity and a ground for thinking seriously about the formation of the Asian Economic Marked.

It is obvious that there is an inverted relationship between the geographical extension of space with integrity and homogeneity of physical and human particulars. Thus, whenever geographical space is small, the homogeneity of its particulars will be more pronounced, and vice versa. Therefore, in regional divisions, the Asian continent is divided into different parts and each part of Asia will possess the common particulars, which also will have the regional particulars.

In Asia, there are disputes and struggles between some countries and that is so in other continents as well. There are some Asian disputes which seem to be internalized but have their impact on the region, like Afghanistan and Tajikistan. In the same way, there are inter-state disputes which are visible in Caucasia, the Peninsula of Korea, and Indo-china, to name a few.

In the last few centuries, America and European powers expanded their domination and exploited the resources of Asia. They also established their direct and indirect presence in this continent. They know well, that Asia has geopolitical importance in today’s world. I repeat that if all the geopolitical factors in Asia are put together, then the geographical center for decision-making and leadership of the world would shift from Europe and America to Asia. In that case, the entire world’s equations and international systems will change.

It is quite obvious that American and European powers would not agree to this since they would be losing their hegemonic hold on the world and therefore, they will try to thwart the whole concept of Asian Unity.

Asia needs “confidence”, and lack of natural trust is responsible for a number of conflicts in Asia. It also had a detrimental effect on commercial cooperation across the continent and also hampered the efforts to achieve scientific and technological progress.

Fortunately, in the 1990’s we witnessed renewed efforts by Asian states to revive trust and confidence. Throughout this decade, a number of confidence-building measures were taken to build mutual trust.

The formation of economical and commercial organizations such as the ASEAN, the SAARC, etc. has been the vital instruments, paving the way for more cooperation and establishing “Confidence” in the region. The population of the ECO and SAARC countries is about 1.5 billion. As many as 17 Asian countries are members of these two organizations. Thus the possibility of establishing closer ties between the two organizations must be seriously explored.

The geographical scenario veers towards the majority of Asian countries, coming together on the basis of common geographical territory. On the other hand, geography is the main axis of this unity. The scenario seems to be more idealist and may not be achieved in a short term. Yet, it could be a living example for our future generations.

This scenario is based on geopolitics. We observe that this continent can be divided into four geopolitical regions with some countries in a polar position. These regions are: East Asia, South Asia, West Asia, and Central Asia.

On the basis of this scenario, the first nucleus of unity can emerge with the presence of some Asian countries that have common stances and views on international and national affairs.

Then the other Asian countries can gradually join this unity. For example, the countries which have common views about the security of Asia, Asian economic common market, Asian common culture, and so on, can serve as the very nucleus of this unity.

Undoubtedly, in the contemporary sense and with the dawn of the new millennium, the issue of the Dialogue Among cultures can serve as one of the most effective means for eliminating misconceptions, misunderstandings, miscalculations, and mistrusts between the nations of the world. The issue of Dialogue is a delicate one. It calls for great patience, tolerance, and mutual respect.

The end of the cold war has infused a sense of solidarity and calls for a commitment to respect for life, liberty, justice and equality, and integrity that have yet to materialize. Interactions and achievements made amongst the world’s cultures, past and present, have gone on to create cultural pluralism and harness creativity in human diversity. The Dialogue is, therefore, not only important for peace and harmony but is the very foundation of creativity and development.

To bring the hearts together, the minds must be brought closer. This can be done by special efforts of great thinkers to understand the great concepts and then try to communicate these to the people.

Asia is the oldest continent of the world with the most ancient civilizations in its fold. The most notable schools of thought, as well as the most significant ideological and religious movements, were born in Asia. Buddhism in India, Zoroastrianism in Persia, Confucianism in China, Judaism, Christianity, and Islam in Mesopotamia and the Arabian Peninsula.

Let us have a look at the main tenets in the aforementioned thoughts and religions: Taoism preaches the virtues of a simple life and the denial of selfishness;

Confucianism’s emphasis is on moral and social order for society. It lays great emphasis on three relationships-between the ruler and subjects, father and son, husband and wife;

Jainism’s true essence is Ahimsa or non-injury and this avoids hurting or killing any object; Buddhism taught four noble truths; Suffering, suffering has a cause, Cause is a desire, it is possible to put an end to suffering, if the desire is removed.

Zoroastrian teachings are based on the right vision, right word, and right action.

Islam, Christianity, and Judaism believe in God, life after death, and purification of man and society.

After going through different cultures (thoughts and religions) of Asia, From Ancient to the present, we witness harmony, respect for mankind and institutions, non-injury, removing suffering from life, encouragement of right vision and action, compassionate and as a whole, a system of values which all people in Asia believe in for a fruitful and constructive dialogue closer to their heart. We can call it the “Asian Values system”. Something that can lead us towards “Asian unity”. 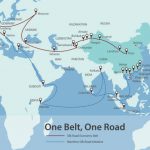 The Belt and Road Initiative(The Importance of Silk Road in Enhancing Cultural Cooperation)
More than two thousand years ago, a famous Chinese envoy, Zhang Qian, of the Han Dynasty explored the Silk Road lying across the Asian-European nations…
Read More